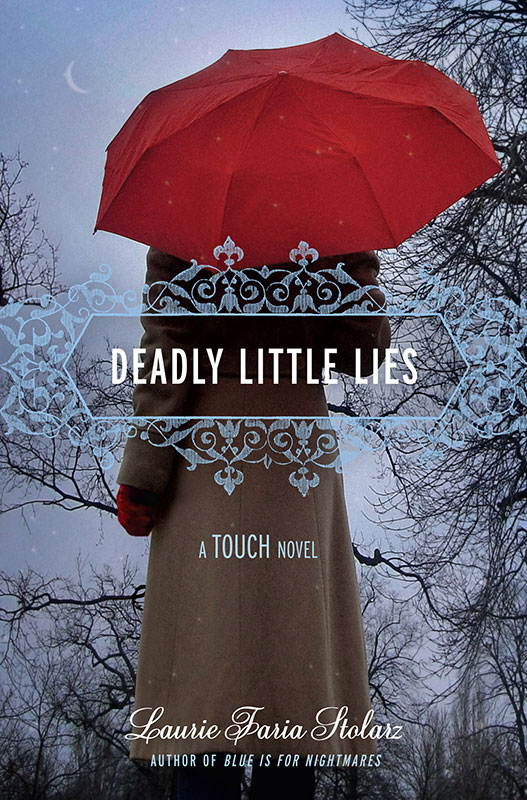 Last fall, sixteen-year-old Camelia fell for Ben, a new boy at school who had a very mysterious gift – psychometry, the ability to sense the future through touch. But just as Camelia and Ben's romance began to heat up, he abruptly left town. Brokenhearted, Camelia has spent the last few months studying everything she can about psychometry and experiencing strange brushes with premonition. Camelia wonders if Ben's abilities have somehow been transferred to her.

Ben returns to school, but he remains aloof, and Camelia can't get close enough to share her secret with him. Camelia makes the painful decision to let him go and move on. Adam, the hot new guy at Knead, seems good for her in ways Ben wasn't. But when Camelia and Adam start dating, a surprising love triangle results. A chilling sequence of events uncovers secrets from Ben’s past – and Adam's. Someone is lying, and it's up to Camelia to figure out who – before it's too late.

Missed the Barnes & Noble exclusive editions of Deadly Little Secret and Deadly Little Lies? I'm now on Wattpad (so come follow me) and I'm releasing Ben's, Kimmie's, and Wes's bonus pages as well as some fun Stacey-and-the-gang pieces. Click here to check it out!

"Laurie Faria Stolarz is a master creator of suspense and romance. Her words cause the heart to pound, the palms to sweat, the spine to shiver, and the stomach to flutter. The trepidation born from the anonymous threats will make the pages fly, and the palpable tension between Camelia and Ben as they attempt to ignore their hearts causes the fire to burn hotter. Stolarz brings back the colorful characters who provided the mood-lightening bits of humor in DEADLY LITTLE SECRET...She also emphasizes the importance of solid friendships to help teens deal with the gut-wrenching experience of witnessing parents fight and tear their lives apart."

"...the perfect book for readers who enjoy series, who like a mystery with a splash of romance, and who live for books that send a shiver down their spines. Stolarz does an excellent job of creating likeable and multifaceted characters: Camelia has a girl-next-door quality and her friends are vibrant. The elements of psychometry will most likely drive readers to investigate more on this unusual ability. This is a series worth recommending..."

“…The plot, the characters and even the writing style continues to fascinate me...This series is probably one of the best of 2009 and I can't wait for the next installment…a 10 out of 10 rating.”